Here's what a few of our customers have had to say about us.
Have a testimonial of your own to share?

Earl and his team are top notch, the entire experience was everything I had hoped for. They are experienced hunters & guides who bring that background each day. I would recommend them to anyone and will be returning next August for another hunt.

I have hunted with the Ivory & Antler team for three years on three different game species with 100% success (black bear, moose, and turkey). I obviously enjoyed taking each of my animals, however what I enjoyed the most was the experience of each hunt. Earl and his team are top notch guides and very professional in their operational standards. I was well aware of what was expected of me for each of my hunts, and was impressed with the level of work the do before, during, and after the hunt in terms of logistics and follow-up. Earl and his team are all about the experience, not just the "kill"!

Moose - Harvested a mature bull named High Horns on the fourth morning of my hunt. Earl had told me about this bull and we actually found him while scouting in late June after I learned I was fortunate enough to draw my once in a lifetime moose tag. Earl guided me on this hunt, and his level of guiding on these Colorado monarchs is unmatched. I did not think we would find this bull, and when he came out of a willow thicket looking for the source of Earl's very convincing cow calls, I was in total amazement, almost as much as I was in after I harvested this incredible bull!

Turkey - Harvested my mature tom on the first morning of my hunt. The mid April pre-dawn woods were so full of turkeys, it was surreal to hear the symphony of gobbles, tree yelps up and down the river on Earl's lease. The set up was perfect and we watched over 30 toms strutting with-in 100 yards of our decoy set up. It did not take long for a mature gobbler to come in to Earl's calls and his decoy set up...AMAZING!!

The whole process was well orchestrated and conducted start to finish. The food and lodging  services allowed for a very amazing interaction between all the hunters and guides during off hunting hours in camp.

Great people help make great memories! Thanks for making my archery hunt such a memorable experience. Looking forward to come back soon!

I want to thank you and your entire staff, especially Ryan for all of your efforts in trying to make sure we all would get an opportunity to harvest an elk. We know that the percentage of chances are not in our favor and true hunters accept that because they are interested in the adventure, not always harvesting an animal. We sure saw alot, and had our chance on the big hay field, and it was very cool watching my hunting partners harvest 3 bulls out of that huge herd we were hunting, that made the trip for me!

Again, thanks for a great time, and kudos to you and your staff!

I wanted to thank you again for our elk hunt this year. I had a great time and learned alot!

Your outfitting business is Top Notch, thanks again and I hope to book a hunt with you again soon!

Steve and I just wanted to say thank you again for the marvelous time we had elk hunting. I of course, had NO idea how things were done and wasn't sure what to expect, but it was all so much more than I could have hoped for, the bugle concert we herd the first night...seeing herds of 200 beautiful critters at a time the second day, having to sit and watch those three bulls for 45 minutes and within 52 yards on the third night and then to actually fill both of our tags on Sunday morning - totally unbelievable!

We have already eaten some of the elk, definitely very tasty and we can not wait to get our hides and skulls back for the wall in our house.

Wishing you both a very Merry Christmas from Wisconsin!

Hey Earl, This morning was a success! A very, very nice Tom! Terry did great! So, we are done for Spring Turkey 2018! We are very satisfied. The property was awesome, and close. Guides were awesome. Wind was rough, but nothing anybody can do about that. Again, a first class experience Earl! Thank you, Mike

Earl and his team provide an incredible experience. This was the first time I hunted with an outfitter and I couldn't have been more impressed. They are extremely knowledgeable and professional from top to bottom. I would highly recommend Ivory & Antler to anyone. In booking this trip it was important to find someone that could accommodate my father's limited mobility and they did just that with success on his first day hunting. I had the experience of a lifetime with Earl, Matt, and the rest of the crew and will be back again soon.

Absolutely amazing experience, this organization from top to bottom is ran with unfathomable amounts of professionalism. The amount of wisdom in the ownership and staff is incredible. If you are looking for the adventure of a lifetime featuring great people, great views and the chance at a quality harvest look no further than Ivory & Antler Outfitters!!! I can't thank you enough for helping me put meat in the freezer and harvest my mature cow. Special thanks to Earl, Adam, and Austin.

My first experience hunting with an outfitter- crew was extremely accommodating and I felt the week was very efficient and simply laid out. A pleasure to spend a week with all involved- I learned a ton and had an experience of a lifetime. Safety and legal hunting were top priorities and I appreciated that. Please heed their words and train before your hunt and break in your boots properly. It made my week so much better. Highly recommend. These are good people.

I have had the benefit of hunting and filming with outfitters all over North America as a camera operator and producer of hunting and fishing TV shows. In all my travels I have never met a more knowledgeable, enthusiastic and fun guide than Earl and the guys he has surrounded himself with at Ivory and Antler Outfitters. As an outfitter his business is top notch and he leaves no stone unturned. I also run a non-profit organization that takes wounded veterans hunting (Hero Expeditions, Inc.) and Earl has made the commitment to help us get a handful of these deserving heroes on cow elk hunts each August. The testimonial letters and thank you letters we receive each year after this hunt are always eye opening. Each year the veterans applaud us for working with Earl and his crew of guides. On top of that the properties they lease are out of this world, it truly has been an honor to hunt with Ivory and Antler Outfitters, we have never been disappointed. 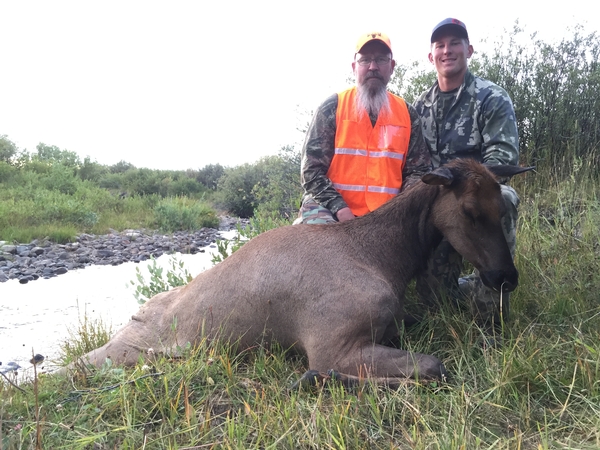 Having never hunted with guides, and never having hunted in Colorado, I was unsure of what to expect! Were they going to just go through the motions and make a half assed effort? Wow! What a surprise! Earl, Austin and Ivory and Antler Outfitters did NOT disappoint! They are the epitome of professionalism. Always making sure we were in the right place at the right time. They are better at tracking than anyone I've ever seen! The cabin, food, fellowship is second to none!! I would not go to anyone else in the future!! Awesome guys! Thank you for everything!!

I shattered my knee playing football earlier in the year and did not think I was going to be able to hunt this year. Thanks to Earl and the folks at Ivory & Antler Outfitters I was given the opportunity. I was limited as I was on crutches. I knew I was going to have to push myself and they helped push me as well. They allowed me to set my own limitations and helped me every step of the way. Thank you guys for everything you did for me. I will be back to hunt with them again.

Earl and his team are top notch. We went there not knowing what to expect, and Earl and his team constantly worked very hard to exceed our expectations. They are very competent as guides but they are also just very nice to be around. There was a lot of laughing involved. We saw a TON of animals over the week. I would definitely suggest you go see Earl is you want to bag a nice Elk and have a great time as well.

Great outfit and team. The operation is top of line with amazing country & ranches that provide great opportunities for you to do your part. I highly recommend Earl and his team to anyone wanting to big game hunt. You won't be disappointed! Give Earl a call and he will set you up for a trip of a life time.

Excellent guys. My second time with Earl and the "boys". The cabin has been upgraded, the food is great. Nice to hang out after a long day of hunting. You can hunt from a blind if you are not in the best physical shape, on go on a 10 mile hike through the rolling hills. Don't sign up for first rifle 2017 I plan on being there then.

I have killed my biggest whitetail and mule deer to date with Earl and Ivory & Antler. Earl and his guides know their property and will put you on the animals! I would give them 6 stars if it would let me.

Had a great time and a successful hunt! Plan on going back and bringing a few friends this year.

Earl is amazing! I have no doubt you'll come away with a nice trophy and a smile on your face!

Great experience with top notch guides! Earl and his crew took great care of my group! 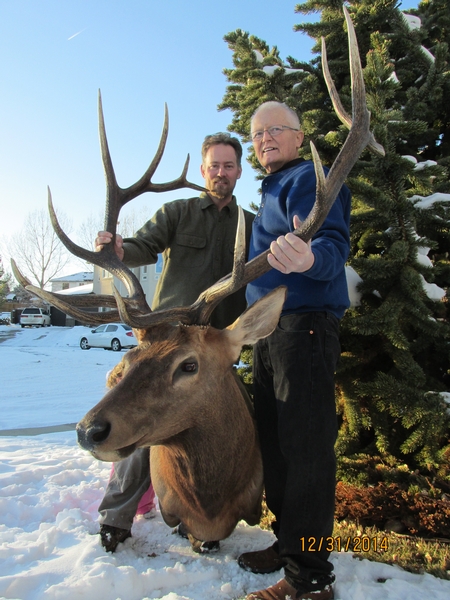 Best outfitter I have ever had the pleasure of hunting with. Earl is a true pro!

We had a "10 out of 10" experience with the Ivory & Antler Outfitters Team and I would highly recommend them to anyone looking to book a hunt.

The Ivory & Antler Team more than met my expectations, I took a first rate bear in record time as advertised..I am looking forward to next season in the high country with Earl and the boys! 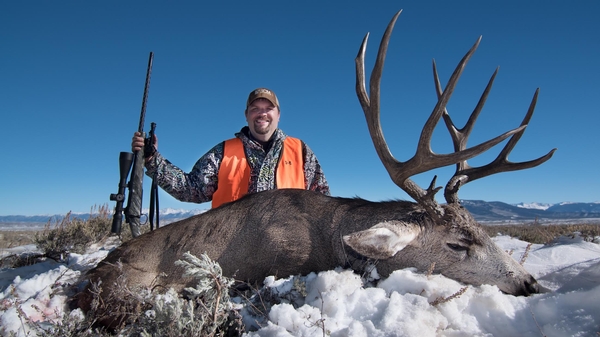 I have killed my largest whitetail and mule deer to date with Earl and Ivory & Antler. Earl and his guides know their property and will put you on the animals! I would give them 6 stars if it would let me. 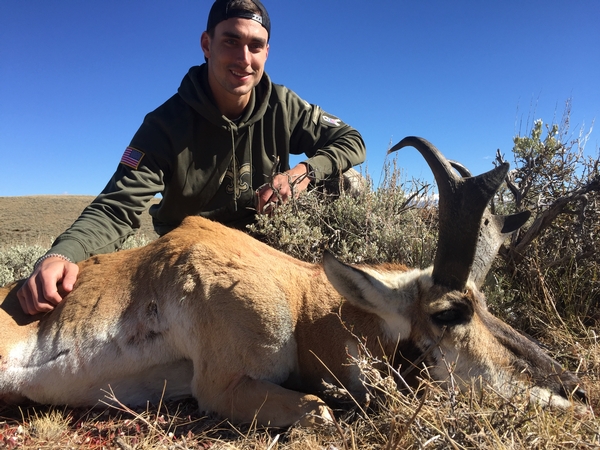 If you're looking for a trophy antelope hunt, Ivory & Antler is your spot. Not only will you have multiple chances at trophy bucks, you'll get to spend time in a beautiful area and make some lifelong friendships.

I was lucky enough to draw my lifetime moose tag on 9 points, as if that was not enough luck I found Ivory & Antler Outfitters, Earl told me how special their ground is and as advertised I was not disappointed...we passed up 6 40" bulls the first morning and then just after lunch I took my 50" bull..I can not say enough, if you draw your moose tag, you better book with Earl.

Send us a Testimonial

To our past clients: We appreciate your comments and if you would, fill out the form with comments and a photo about your experience at Ivory & Antler Outfitters. Fields marked with * are required. Please enter the Name field how you want your name to read on our website (Examples: John Doe, J. Doe, John D., John Doe Corporation).